This article is a stub. You can help Divergent Wiki by expanding it.

A place controlled by the GPs

Allegiant
The Bureau of Genetic Welfare is revealed in Allegiant.

The Bureau is located outside of the Chicago Experiment, at the old Chicago O'Hare International Airport. In Allegiant, Tris, Peter, Christina, Uriah, Tobias, Caleb, and Cara journey outside the fence and stumble upon this location. This is where they find out if they are actually Divergent or not and their bravery is put (even more) to the test.

Following the brutal and devastating Purity War, which resulted from attempts to genetically remove negative behaviors from societies, the Bureau was founded to use selective breeding to repair the genetic 'damage' over several generations.

They forcibly isolated several urban population centers and used Memory Serum to keep the populations from attempting to rebel or escape. Once a large enough portion of the populations were Divergent, they would be told to leave the city. The Bureau organized the populations into Factions because this was found to help prevent the city experiments from imploding.

The Bureau used extensive surveillance systems to monitor the cities, but have allowed atrocities to occur out of fear that intervention would compromise the experiments. Moreover, they encouraged the Abnegation Sector Genocide to prevent Abnegation from releasing the information that their world is an experiment.

The importance placed on genetic purity means that genetically 'damaged' people (also known as GDs) were often the subject of discrimination.They also found out Tobias was not Divergent. This stemmed from the misconception that only GDs are violent, a misconception developed as a result of witnessing chaos in the fringe. Because of this, extremists like Nita have tried to use violence to overthrow them. Despite the discrimination, they do not perform capital punishment on GDs.

Discrimination against Genetically Damaged Persons in the local region ended when Tris broke into the weapons lab and released the Memory Serum, effectively erasing the prejudice from the local population. However, she was shot to death by David while doing so. Convinced of its own mission to repair the genetic 'damage' the Bureau would stop at nothing to continue the experiments. 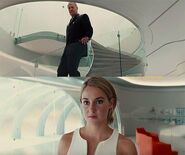 This is Tris and David talking 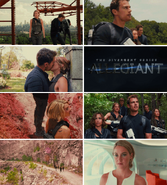 Again this will only give you one pic from the trailer