Divergent is the film adaptation of the novel of the same name by Veronica Roth. It was directed by Neil Burger and was released on March 21, 2014.

In a futuristic dystopian Chicago, society is divided into five factions: Abnegation (the selfless), Amity (the peaceful), Candor (the truthful), Erudite (the intelligent) and Dauntless (the brave), based on their personalities. Beatrice Prior (Shailene Woodley) is in Abnegation, the faction that looks after the factionless, those who don't fit in any faction, as well as runs the government; though she has always been fascinated by Dauntless. Her father, Andrew (Tony Goldwyn) serves on the ruling council along with the head of Abnegation, Marcus Eaton (Ray Stevenson).

Young 16-year-old citizens have undergone Aptitude Test using a serum to indicate which faction they would really fit and which they would need to choose on the Choosing Ceremony. Beatrice takes the Aptitude Test with Dauntless woman, Tori Wu (Maggie Q) as her proctor. Her test has resulted different attributes of several factions (Abnegation, Erudite and Dauntless), which means she is Divergent. Since Divergent people can think independently and government cannot conform their thinking, they are considered threats to the social orders. These are the reasons why Tori warns her to keep her true test results a secret.

The next day at the Choosing Ceremony, Beatrice's brother Caleb (Ansel Elgort) chooses Erudite while Beatrice chooses Dauntless. Right after the ceremony, Beatrice meets Christina (Zoë Kravitz) and Albert (Christian Madsen), two Candors who chose Dauntless, and Will (Ben Lloyd-Hughes), an Erudite who also chose Dauntless. Dauntless initiates were put to tests such as jumping off from a running train at full speed, and leaping of faith from a tall building into a large hole. During these tests, the initiates meet Eric (Jai Courtney), a brutal and the youngest leader of Dauntless, and Four (Theo James), the initiates instructor. Beatrice is the first initiate who leaped from a building; this has branded her as First Jumper. After jumping, Four asks for her name, Beatrice shortens it to "Tris".

Tris struggles in Dauntless training, but as it progresses she slowly improves. After being forced to fight with her enemy Peter Hayes (Miles Teller) and being hospitalized, Tris almost fails out of Dauntless, but rescues herself after playing a key role in winning a capture-the-flag game.

After the physical stage of Dauntless training, the initiates are put into simulations in order to face their fears. Tris's divergence allows her to excel at these tests, but Four, who strikes up a relationship with Tris, warns her that she must conceal the true reason behind her success and solve the challenges using the methods a Dauntless candidate would.

The next day, Tris visits her brother in Erudite, who explains to her that Erudite is planning to overthrow Abnegation and become the ruling faction. On her return to Dauntless headquarters Tris is attacked due to her success in training, with Peter, Al, and Drew attempt to throw her into the chasm, but she is rescued by Four. The next day, Al pleads with Tris and begs for her forgiveness but Tris refuses calling him a "coward", Al then kills himself by jumping into the chasm. In preparation for Tris's final test, Four takes Tris into his fear simulations where she finds out his real name is Tobias, son of the leader of Abnegation and head of government, Marcus Eaton. After the simulation Four and Tris realize they have feelings for each other and share a kiss. When the day of the test comes, Tris passes without revealing she is Divergent. During the post-test celebration, the Dauntless are then injected with a serum which is to be administered as a tracking device.

The next morning Tris wakes up to realize the injection was actually a mind-control serum that Erudite is using to manipulate Dauntless into attacking Abnegation. As Divergent people are unaffected, Tris and Four have to blend in. At Abnegation, Eric figures out that Four is not under the simulation, which leads to both him and Tris being caught and separated. Tris's mother Natalie (Ashley Judd) shows up and rescues Tris but dies in the process. To stop Erudite from killing Abnegation, Tris, her father, brother, and Marcus attempt to sneak into Dauntless headquarters. Tris sees that Peter is not under the serum and orders him to take them to where the Erudite set up their operations. Her father sacrifices himself in a shootout. Tris goes in alone and finds Four, whose mind control she is able to break. Jeanine Matthews (Kate Winslet), leader of Erudite, is about to start to execute the protocols that will make Dauntless kill Abnegation, but Tris stabs Jeanine through the hand with a throwing knife, then injects her with the serum and orders her to stop and delete the program. Tris, Caleb, Peter, Four, and Marcus then flee Dauntless on the train, intending to ride to the end of the tracks.

In March 2011, Summit Entertainment picked up the rights from for Divergent with Douglas Wick and Lucy Fisher's production company Red Wagon Entertainment. Neil Burger was announced as the director on August 23, 2012. Evan Daugherty, who co-wrote the screenplay with Vanessa Taylor, said, "I get hung up on the toughness of the movie but of equal importance is the love story between Tris and Four. It's inherently and inextricably linked to Tris' character journey. There will be plenty of sexual tension and chemistry, but it's important that all of that stuff doesn't just feel like it's thrown in, but that it all helps Tris grow as a character." Daugherty further added, "It's tricky because the book is a very packed read with a lot of big ideas. So, distilling that into a cool, faithful two-hour movie is challenging. Not only do you have to establish five factions, but you have to acknowledge that there's a sixth entity, which is the divergent, and you also have the factionless. So there's a world that really has to be built out for the big screen… the movie is going to do it a little more efficiently." Author Veronica Roth said about the script of the film: "Reading a script is a really interesting experience. I'd never read a script before. I was really impressed by how closely it stuck to the general plot line of the book."

Initially budget of the film was $40 million but later Lionsgate increased it to $80 million due to the success of The Hunger Games. Analyst Ben Mogil said, "Divergent is more similar to Hunger Games in that the company owns the underlying economics (i.e. production) and the budget (at $80mn) is more manageable."

On October 22, 2012 it was announced that Shailene Woodley had landed the lead role of Tris Prior. Lucas Till, Jack Reynor, Jeremy Irvine, Alex Pettyfer, Brenton Thwaites, Alexander Ludwig and Luke Bracey were all considered for the role of Tobias "Four" Eaton. On March 15, 2013, it was announced that Theo James had been cast as Four.

Though James was 10 years older than the character when cast, Roth praised his casting "I was sure within seconds: this was 'Four', no question. Theo is able to capture 'Four's' authority and strength, as well as his depth and sensitivity." She also mentions the chemistry between him and Shailene: "He is a perfect match for Shailene's incredibly strong presence as Tris. I'm thrilled!" The producers said about his casting: "We took our time to find the right actor to fill the role of Four, and Theo is definitely the perfect fit. Veronica has crafted a truly iconic character in Four and we cannot wait to begin production and bring him and this story to life for millions of fans around the world."

Ray Stevenson, Jai Courtney, and Aaron Eckhart were announced to be in talks to join the cast on March 15, 2013, Stevenson and Courtney joined the cast as Marcus Eaton and Eric, respectively. Kate Winslet was announced to be in talks on January 24, 2013. Later it was confirmed that she would portray Jeanine Matthews. Talking about playing the negative character for the first time, Winslet said, "I'm no idiot. The idea went through my head that I have never played a baddie before, I was almost kind of surprised." Since Winslet joined the filming late, she used that distance from her co-stars to appear aloof on the first day of her shoot. "I wanted to break it and say, 'It's OK, I'm really fun. I promise.' But I thought, just for today, I'd let them think that I am a complete bitch."

Filming began in Chicago in April 2013 and concluded on July 16, 2013. Virtually all production photography took place in Chicago; many of the interior locations were filmed at Cinespace Chicago Film Studios. Scenes for the "choosing ceremony" were shot at 17th Church of Christ, Scientist, Chicago on East Wacker in downtown Chicago. Filming also took place at the Navy Pier Ferris Wheel; the entire area was treated with dirt and rust to appear more dystopian. Additional scenes were shot at 57th Street and Ellis Avenue near University of Chicago, at Federal Street where fake EL tracks were constructed and at Michigan Avenue.

For the Abnegation sector, the production team constructed the set on Wells Street in downtown Chicago. In late June, filming took place at 1500 S Western Avenue and 600 S. Wells Street, Chicago. In the last schedule, filming moved to the Chicago River and continued at Lake Street Bridge, Wacker Drive and LaSalle Street Bridge. Filming wrapped on July 16, 2013, however on January 24, 2014 what is believed to be additional scenes will shoot in Los Angeles, finishing on January 26, 2014 which will be officially the last day of shooting.

Post-production work began after filming wrapped. On July 18, Summit and Lionsgate issued a joint statement announcing the film will be released in IMAX format: "We're delighted to continue our successful collaboration with IMAX, with whom we have already partnered on the global blockbuster Hunger Games and Twilight Saga franchises, and we're especially pleased that we can introduce our newest young adult franchise, Divergent, to the movie going public in the premium IMAX format that celebrates its status as a special and memorable event."

The first image of Shailene Woodley as Tris Prior was revealed by Entertainment Weekly on April 24, 2013. A few seconds sneak preview footage of the film was shown at the 2013 Cannes Film Festival. On June 7, Entertainment Weekly released a still of Theo James (Four) showing the Dauntless initiates around their new headquarters. The magazine released several more stills on July 19. On July 16, USA Today released the first image of Kate Winslet as Jeanine Matthews.

On August 22, 2013 a sneak peek of the first teaser trailer was released by MTV. The full teaser was released on August 25, 2013 during the pre-show of the MTV Video Music Awards. Two official posters featuring Woodley and James as Tris and Four and highlighting their tattoos were released on September 23, 2013. Neil Burger released the full official trailer on November 13, 2013. On February 4, 2014 Shailene Woodley and Theo James released the final trailer for the film, during their appearance for film's promotion at Jimmy Kimmel Live!. 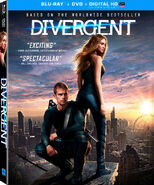 Differences from the Book

On May 7, 2013, Summit Entertainment revealed that a sequel, based on Insurgent, is already in the works. Brian Duffield, writer of Jane Got a Gun, has been hired to write the script. The sequel is scheduled to be released on March 20, 2015. The third film, based on Allegiant, was initially announced as a single film scheduled for release on March 18, 2016. Neil Burger will not return for the sequels. On February 11, 2014, it was announced that Robert Schwentke will take Burger's place for the next installment. On March 21, 2014, Lionsgate officially greenlit the film adaptation of Insurgent. On April 11, 2014, Summit Entertainment announced that the third film would split into two films titled The Divergent Series: Allegiant — Part 1 and The Divergent Series: Allegiant — Part 2, with Part 2 scheduled to released on March 24, 2017. Principal photography for Insurgent began in Atlanta on May 27, 2014.

Behind the Scenes/ Trivia