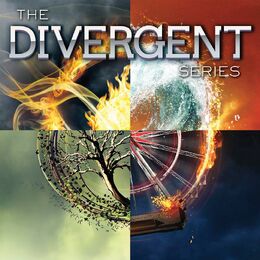 The Divergent trilogy (also known as The Divergent Series) is a series of three young adult dystopian/science-fiction books by Veronica Roth and published by Katherine Tegen Books. It is set in the future of a dystopian Chicago. The society is composed of five factions, where members of each faction dedicate themselves to the cultivation of a particular virtue. Divergent, Insurgent and Allegiant.

Beatrice Prior, the main character lives in a world of dystopia where society is divided into five factions. Each faction dedicates themselves to the cultivation of a particular virtue— Candor (the honest), Abnegation (the selfless), Dauntless (the brave), Amity (the peaceful), and Erudite (the intelligent). During the Choosing Ceremony which happens once a year, all sixteen-year-olds must select the faction to which they will devote the rest of their lives. Beatrice joins Dauntless and leaves her family behind while at the same time learning about a dangerous trait she has, Divergence. Beatrice renames herself "Tris" as the highly competitive initiation ensues. In the end, she completes initiation and is accepted into the faction. The world is thrown into chaos however, right after initiation when Erudite takes control of Dauntless and wages a war on the rest of the factions resulting in near annihilation of Abnegation with the help of her so-called friend, also known as her soon to be boyfriend, Four, who you will eventually know as Tobias from the faction of Abnegation. His father was a council member just like Tris's father.

One choice can transform you-or it can destroy you. But every choice has consequences, and as unrest surges in the factions all around her, Tris Prior must continue trying to save those she loves—and herself—while grappling with haunting questions of grief and forgiveness, identity and loyalty, politics and love. Tris's initiation day should have been marked by celebration and victory with her chosen faction; instead, the day ended with unspeakable horrors. War now looms as conflict between the factions and their ideologies grows. And in times of war, sides must be chosen, secrets will emerge, and choices will become even more irrevocable—and even more powerful. Transformed by her own decisions but also by haunting grief and guilt, radical new discoveries, and shifting relationships, Tris must fully embrace her Divergence, even if she does not know what she may lose by doing so.

Allegiant, the final book in Veronica Roth's Divergent Series, was released on October 22, 2013.

The faction-based society that Tris Prior once believed in is shattered—fractured by violence and power struggles and scarred by loss and betrayal. So when offered a chance to explore the world past the limits she's known, Tris is ready. Perhaps beyond the fence, she and Tobias are freed from complicated lies, tangled loyalties, and painful memories.

Two years before Beatrice Prior made her choice, the sixteen-year-old son of Abnegation’s faction leader did the same. Tobias’s transfer to Dauntless is a chance to begin again. Here, he will not be called the name his parents gave him. Here, he will not let fear turn him into a cowering child.

Newly christened “Four,” he discovers during initiation that he will succeed in Dauntless. Initiation is only the beginning, though; Four must claim his place in the Dauntless hierarchy. His decisions will affect future initiates as well as uncover secrets that could threaten his own future—and the future of the entire faction system.

Two years later, Four is poised to take action, but the course is still unclear. The first new initiate who jumps into the net might change all that. With her, the way to righting their world might become clear. With her, it might become possible to be Tobias once again.

From #1 New York Times bestselling author Veronica Roth comes a companion volume to the worldwide bestselling divergent series, told from the perspective of the immensely popular character Tobias. The four pieces included here—The Transfer, The Initiate, The Son, and The Traitor—plus three additional exclusive scenes, give readers an electrifying glimpse into the history and heart of Tobias, and set the stage for the epic saga of the Divergent trilogy.