The Box is featured in The Divergent Series: Insurgent as a form or collaboration of some of the stuff from the Insurgent novel written by Veronica Roth. In the film, the Box puts together two key elements of the final chapters of the novel: The Simulations on Erudite and the Edith Prior video featured at the end of the novel. 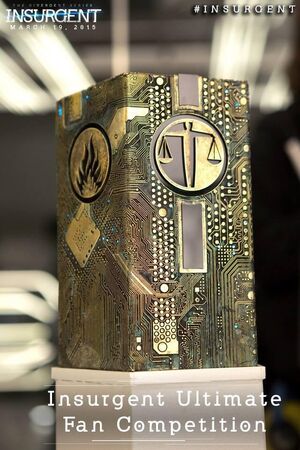 The Box is a mysterious artifact that was hidden by Andrew and Natalie Prior at Abnegation. It has the symbols of all five factions on each side of it and the content of the Box, as revealed in the film, is a message from Edith Prior (thus her name is not mentioned in the film) explaining that the whole faction system is an experiment and that Divergents are the solution to the problems outside the fence.

Jeanine Matthews reveals that only a Divergent can unlock what's inside the box and she orders to capture Divergents across the city to find the one who can open it. To "open the box" the Divergent must pass a series of five simulations (one for each faction) that challenge the subject to prove their Divergency. This means that only a Divergent with potential for all five factions can open the box, not another with potential for only a few of the factions.

Jeanine tried to open the box with six subjects with small potential for the factions and all six subjects died in the simulations. When she learns of Tris Prior's pure divergency she enlists Peter to find a way for Tris to turn herself in to the Erudite. After Tris accepts that Jeanine won't stop the suicides until she finds her, she turns herself in and Jeanine begins the experiments on her.

The Simulations of the Box Edit

Tris enters a destroyed city landscape, where she has to save her mother, Natalie Prior, who is trapped inside an Abnegation house that begins to float high in the sky. Tris runs after the floating house through destroyed buildings, hanging from wires and avoiding giant windmills, ultimately saving her mother from falling to her death. Curiously, the simulation includes Ravens flying around the floating house. This could be a nexus to Tris' fear landscape on Divergent.

Right after saving her mother, Tris is transported to the inside of an Abnegation house where she opens up to her mother about the events that have transformed her since she learned of her Divergency. Tris admits that she only is pretending she is as fearless and brave as she should be, but on the inside she feels weak and sad. Finally, as soon as she admits that if she wasn't Divergent at all none of the events that destroyed her family would have happened, her mother smiles at her and the simulation ends.

Tris opens her eyes in the Erudite lab, and sees that the Erudite are under attack by a Dauntless army. The door to the simulation room is blasted and Four emerges from the exit, disconnecting Tris from the simulation machine and hands her a gun. Tris and Four go through the Erudite building until they get to a bridge where Tris asks him how they passed through all security, to which Four answers something Uriah told Tris about how scary and intimidating Four is (something Four hasn't heard in reality). This prompts Tris to realize this has all been a simulation and approaches Four and tells him that she is sorry for leaving him, after this Four's body begins to disintegrate and the simulation ends.

Tris spares the life of Peter when she escapes the Erudite lab in the Erudite simulation.

Tris manages to surpass four simulations on her first attempt, but given the high brain capacity needed to complete the simulations, she is put to rest after completing the Erudite Sim only to attempt the Amity Sim the following day.

Tris finds herself in the chair of the Erudite Sim Lab, confronted by Jeanine, who tells her that the Amity Sim can only be completed by someone who feels calm and peaceful. From behind the heavy glass wall, Jeanine taunts her about the irony of the situation (since Tris is filled with anger over her past failures,) which provokes her into a rage. Tris violently disconnects herself from the simulation machine and lunges towards towards Jeanine, crashing through the glass wall. However, before she reaches her target, time slows, the room begins to collapse and Jeanine's body disintegrates, leaving Tris suspended in mid-air. Suddenly, the room explodes and Tris starts falling towards the city streets far below, although the entire simulated city also appears to collapse as she plummets to certain doom.

Tris is once again connected to the machine, and Jeanine tells her she's worse than her mother. Tris declares that she won't fight with her, to which Jeanine answers that Tris must instead fight herself. Across the room, a mirror image of Tris appears and imitates Tris' movements. The doppelganger tells Tris that she, herself, is the thing she hates most and then charges toward her. As the doppelganger begins to hit her, Tris insists that she won't hit back or attack her, but the room menacingly collapses a bit with every beat. Finally, Tris realizes that she needs to find peace with her emotions to end the fight, and this resolves the test, despite the doppelganger's continued mockery. The final simulation has been passed, because Tris has finally forgiven herself for the mistakes she has made, and the transformative events that she could not control.

This ties into all the box-related changes, but the ending of the movie sees a mass migration of the dystopian Chicago citizens towards the city’s walls and the outside world. Like it’s actually everyone except Evelyn and Jeanine, given how many people you see in the shot. The book ends the moment after the last word of the video message from Edith Prior, and in the first few chapters of Allegiant, Evelyn is preventing anyone from leaving the city.

We’re guessing this all means that Alleigiant parts 1 and 2 will be significantly different from the book as well, which we’re kind of OK with, given the issues with that installment.[1]

Clips of what is inside itEdit

Pictures of what is inside itEdit

Retrieved from "https://divergent.fandom.com/wiki/The_Box?oldid=60603"
Community content is available under CC-BY-SA unless otherwise noted.