The Divergent Series: Allegiant is the first part of the film adaptation of Allegiant by Veronica Roth. It was directed by Robert Schwentke and was released on March 18, 2016.

The third installment of the blockbuster Divergent series franchise, ALLEGIANT takes Tris [Shailene Woodley] and Four [Theo James] into a new world, far more dangerous than ever before.

After the earth-shattering revelations of INSURGENT, Tris must escape with Four and go beyond the wall enclosing Chicago. For the first time ever, they will leave the only city and family they have ever known. Once outside, old discoveries are quickly rendered meaningless with the revelation of shocking new truths. Tris and Four must quickly decide who they can trust as a ruthless battle ignites beyond the walls of Chicago which threatens all of humanity. In order to survive, Tris will be forced to make impossible choices about courage, allegiance, sacrifice and love.

(Official Summary from The Divergent Series)

Many Chicago citizens run toward the wall, but soldiers under Evelyn (Naomi Watts) are told to shut down the perimeter, and thus, no one is allowed through. Evelyn directs Jack Kang (Daniel Dae Kim) of Candor to hold trials for the Erudite and Dauntless conspirators, in which a number of them become executions, starting with Max (Mekhi Phifer). Evelyn and Johanna (Octavia Spencer) attempt to pressure Tris (Shailene Woodley) and Four (Theo James) into taking leadership positions in the new world order but both refuse. After seeing that the hostile situation within the city is only going to get worse, Tris escapes with Four, Caleb (Ansel Elgort), Christina (Zoë Kravitz), Tori (Maggie Q), and Peter (Miles Teller) to journey beyond the wall that encloses Chicago. However, Tori is killed by Edgar (Jonny Weston) in the attempt.

The group is ambushed by Edgar, who is later disabled by an armed group of individuals and airships. The soldiers take the group to the Bureau of Genetic Welfare, a highly advanced city where they learn that years ago the government believed that society's problems were caused by "damaged genes". In an attempt to create a better society, they began to modify people's genes, with disastrous results. The government set up "experiments" in an attempt to repair this mistake, establishing isolated cities across the remains of the United States. The hope is to raise enough genetically pure Divergent individuals to fix the "genetic damage" left in the wake of the Purity War.

Tris and Four are tested by Matthew (Bill Skarsgård) and Nita (Nadia Hilker) to verify and study their Divergence. Tris is shown to be truly Divergent, but Four's genetic structure indicates that his genes are still "damaged". Caleb and Peter are assigned to surveillance teams that monitor Chicago. Matthew then brings Tris to the leader of the Bureau, David (Jeff Daniels). David gives Tris a device that allows her to view her mother's memories, and sees that her mother was rescued and adopted by the Bureau before volunteering to join the Chicago experiment out of dedication to the project. In return for his help in restoring peace to Chicago, Tris agrees to help David, who claims that only the council he reports to have the power to intervene.

Meanwhile, Four and Christina train with Nita and join the Bureau's military force. They join the military on a rescue mission to a nearby wasteland village, though Four becomes mistrusting of the Bureau's intentions after realizing that they are going there to kidnap and forcefully integrate children into the Bureau's populace. Upon their return, Four discreetly petitions Caleb to keep an eye on the situation in Chicago. Four also attempts to warn Tris of the Bureau's intentions, but she rejects his ideas.

Caleb warns Four of a rapidly escalating conflict back in Chicago between Johanna's group of Allegiants and Evelyn's factionless, with open war becoming an imminent threat. Four appeals to Tris for her to return to Chicago with him to end the bloodshed, but she decides to go with David to Providence to meet with the council. David agrees to reinsert Four back in Chicago, escorted by Matthew and some Bureau soldiers. Once in the air, Matthew quietly reveals to Four that the flight is a trap and he is meant to be killed. A skirmish breaks out and Four defeats all of the soldiers, though the airship crashes as a result. Matthew betrays David by helping Four get through the cloak wall. Four proceeds to Chicago while Matthew remains behind to be rescued by the Bureau and warn Tris.

Meanwhile, Tris and David meet with the council. Tris disagrees with the council's objectives and criticizes how they have done nothing to stop the violence in Chicago. The council responds that David had the power to intervene whenever he desires, revealing that he has lied to her from the beginning. During the return flight to the Bureau, Tris ends their partnership. Upon her return, she gathers Caleb and Christina in David's airship to return to Chicago, and Nita helps them escape.

Four is captured by the factionless and confronts Evelyn to end the violence although she shows no intention of standing down. Tris, Caleb, and Christina arrive to find the city tearing itself apart at the opening stage of a full assault by the Allegiant. David makes a deal with Peter in exchange for Peter's promotion and inserts him into Chicago to convince Evelyn to deploy a hidden Bureau stockpile of gas to wipe the memories of the attackers and force a peace in her favor, to which she reluctantly agrees. Peter takes her to a vault where she can deploy the gas across the city but remain safe herself, making them the only individuals in Chicago who will remember any of those events.

Tris and Christina fight through the factionless and arrive at the vault, having rescued Four along the way. At the vault door, Four convinces Evelyn to stop the gas attack, as he would not remember who she was if she carried it out. She folds and stops the release, and is shot by a frustrated Peter. Peter gloats in his victory until the same gas starts releasing inside the vault as well. Realizing David has betrayed him, Peter opens the vault so Tris and Four can stop the gas release and flees back towards the cloak wall, as Four says he will find Peter.

Caleb arrives and aids Tris in destroying the gas dispersion hub, stopping the release. The group gathers atop the Erudite building as they watch the stolen shuttle fly back towards the Bureau, heavily laden with explosives. Tris transmits a message to the whole city, revealing to them the existence of the Bureau and that Chicago was an experiment of the Pure. Her message to the Bureau is that Chicago is no longer their experiment, but the home of its citizens. Caleb detonates the explosives at the end of the message, tearing a massive hole through the cloak wall and revealing the two cities to each other. The group then gazes at the Bureau in the distance, with David standing behind Tris via his machine, glaring at her.

The splitting of Allegiant into two films was officially announced on April 11, 2014. “Veronica Roth brings her captivating story to a masterful conclusion in Allegiant, a rich, action-packed book with material that is ideally suited to two strong and fulfilling movies,” said Lionsgate Motion Picture Group Co-Chairmen Rob Friedman and Patrick Wachsberger in a statement. “The storytelling arc and world of the characters lend themselves perfectly to two films, a storytelling strategy that has worked very well for us on the two Twilight Breaking Dawn films and about which we’re tremendously enthusiastic for the two upcoming Mockingjay films of The Hunger Games franchise.”

Veronica Roth revealed via Tumblr on September 10, 2015, that the fourth movie would have a title change, resulting in the "Part 1" being removed from the title of the third film.

Filming for Allegiant started in Atlanta, Georgia on May 18, 2016, and was concluded on August 23. Shooting also took place in Lindale Mill outside the city from June 11 to 23.

Post production (as well as development and filming) for Allegiant was reportedly rushed, as revealed in a conference call for Lionsgate's CEO (see below). It was reported that the crew was on an "impossible schedule" in terms of visual effects and music. In February 2016, it was revealed that director Robert Schwentke wouldn't direct Ascendant due to the tight time-crunch. Schwentke was working seven days a week, and had to start pre-production on Ascendant soon after. The Hollywood Reporter looked into the situation after Allegiant was released, and revealed that he was under huge stress and exhaustion. One particular news report rumoured that there was conflict between star Shailene Woodley and Schwentke, with Woodley reportedly unhappy with Allegiant's script and Lionsgate pushing the release date without taking their time.

Several trailers where released to promote the film. A teaser was released in September 2015, and an official trailer in November. In January 2016, a trailer called "Tear Down the Wall" was aired, and another final trailer in February. In the months leading up to Allegiant's release, a group of TV spots aired which contained newer shots, and more polished visual effects and reshoots.

The Divergent Series: Allegiant was a box-office disappointment. It grossed $66.2 million in North America and $110.7 million in other territories for a worldwide total of $176.9 million. It grossed nearly 200 million less than its two predecessors. The sudden loss of interest in the series led Lionsgate to both slash Ascendant's budget, and possibly move it to a TV film. The final decision for this move is yet to be seen.

Allegiant was cooly received by critics, receiving only a 13% fresh rating on Rotten Tomatoes and on Metacritic it scored 33 out of 100. It was criticised for its lack of originality, divergence from the novel, a problematic script and bad visual effects. It received mostly negative reviews from critics, audiences and fans. Its most criticism derived from Lionsgate's move to split the final book into a two-part finale, which was viewed by most people as a cash-grab.

The negativity led to Lionsgate admitting that the film had been "rushed", as they had wanted to meet a specific release date. The CEO Jon Feltheimer said in a conference: “Maybe we rushed the third movie a bit instead of taking our time with it. We wanted to hit a date.” 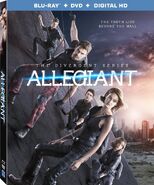 Battle in the Bullfrog

Battle in the Bullfrog

Finding the Future: Effects and Technology

The Next Chapter: Cast and Characters