Ascendant or 'The Divergent Series: Ascendant' was to be a drama series on Starz-  the second part of the film adaptation of Allegiant  by Veronica Roth. It was set to be directed by Lee Toland Krieger and written by Legend of Tarzan screenwriter, Adam Cozad. It was eventually cancelled, some sources claim that this was due to actors quitting participation.

Beatrice Prior and Tobias Eaton venture into the world outside of the fence and are taken into protective custody by a mysterious agency known as the Bureau of Genetic Welfare. They discover the unknown truths of their real world in the second and final part of the thrilling ending to the Divergent Series.

unknown as the series was never released

The splitting of Allegiant into two films was officially announced on April 11, 2014. “Veronica Roth brings her captivating story to a masterful conclusion in Allegiant, a rich, action-packed book with material that is ideally suited to two strong and fulfilling movies,” said Lionsgate Motion Picture Group Co-Chairmen Rob Friedman and Patrick Wachsberger in a statement. “The storytelling arc and world of the characters lend themselves perfectly to two films, a storytelling strategy that has worked very well for us on the two Twilight Breaking Dawn films and about which we’re tremendously enthusiastic for the two upcoming Mockingjay films of The Hunger Games franchise.”

The film's name was originally scheduled to be The Divergent Series: Allegiant - Part 2, but the name was eventually changed. Veronica Roth confirmed the change via Tumblr in September 2015.

In December 2015, Variety reported Ascendants release date had been pushed back again and would premiere on June 9, 2017, for the theatrical release Power Rangers to take the March 24, 2017 spot.[3]

After the underperformance of Allegiant at the Box Office, Lionsgate announced there would be a TV film that will lead to a spin-off television series. On September 16, in a conference call with fansites, Lionsgate officially confirmed the rumors that Ascendant will not have a theatrical release and will be played out in a TV project. They are actively searching for networks and once decided that the network will choose whether they want to do a TV Film or TV Series to finish off the series.

On August 2, it was announced that Ascendant will be a Starz Drama Series and will still be directed by Lee Toland Krieger and written by Adam Cozad. The project is still in the early stages. 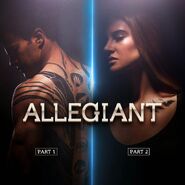