This article is about the film. For the book, see Insurgent.

The Divergent Series: Insurgent is the film adaptation of Insurgent by Veronica Roth. It was directed by Robert Schwentke and was released on March 20, 2015.[1]

Following the assault on Abnegation by Jeanine's mind-controlled Dauntless soldiers, Eric and his platoon are searching through the wreckage of Abnegation for a box of unknown origin containing the symbols of all the factions. Upon recovery, the box is taken to Erudite, and Jeanine claims that it contains data from the city's founders, and the means to end the Divergence problem. However, only a Divergent can open the box, and she orders that all Divergents be hunted down and captured.

Tris, Four, Peter, and Caleb are hiding out in Amity territory. After Tris and Peter get into a scuffle, Johanna, the leader of the Amity faction, warns Tris that her obsession with revenge will consume her. Soon after, Eric and his fleet arrive to test all the occupants for Divergence. Peter gives up the group's location as Tris, Four, and Caleb escape and board a train headed into Factionless territory.

During the ensuing fight with Factionless aboard the train, Caleb makes his first kill. Horrified by what he has done, he watches helplessly as Tris is attacked by one of the Factionless. Four reveals his true name, Tobias Eaton, to the Factionless, who reply that they have been searching for him.

Four, Tris and Caleb are given safe passage into the heart of Factionless. There, Tris and Caleb discover that the Factionless' leader is Four's mother, Evelyn Johnson-Eaton. Evelyn suggests that Dauntless and Factionless should join their forces against Erudite, but the discussion becomes an argument about Evelyn's true intentions and her past relationship with her son. The next morning, the three leave Factionless for Candor to meet up with the remaining Dauntless. During the trek, Caleb tells Tris that he cannot continue with them, and goes in a different direction.

When Tris and Four arrive at Candor, they are welcomed by their Dauntless brethren, and Tris is not entirely truthful with Christina about what happened to Will. Soon, however, they are arrested and brought before Jack Kang, the leader of Candor, who doesn't believe that Jeanine would go so far as to fraudulently make Tris and Four wanted for attacking Abnegation. Four tries to reason with Jack, inquiring about the fairness of a trial in Erudite as opposed to one in Candor, and then requests the trial be conducted in Candor through truth serum.

During the trial, Four admits that he joined Dauntless to escape his father's abuse, and he was about to leave Dauntless to be factionless after a last group of initiates, but he fell in love with Tris and decided to protect her. Tris tearfully admits her guilt in shooting Will, angering Christina. Candor is then attacked by Dauntless traitors led by Eric, and many people are shot with new simulation serum. Tris and Uriah, who is revealed to also be Divergent, are captured by Eric. Eric tests Tris and discovers that Tris' Divergence is 100%, making her the perfect subject to open the box. They are then rescued by Four and Candor, and Eric is taken into custody where Four executes him. In Erudite, Jeanine, frustrated that none of the Divergents she has used to open the box have survived, is approached by Peter who pledges his loyalty to Erudite. Peter suggests that the best way to get Tris to surrender is to play with her humanity.

Back in Factionless, Four reluctantly agrees with Evelyn that war is inevitable and they need to prepare. The long term sim serum is activated by Jeanine, causing Marlene, Christina and Hector to stand on a ledge repeatedly chanting[2] that Tris Prior must turn herself in or more death will follow as they step closer and closer to the edge. Tris and Tori climb the sides as fast as they can, and rescue two of the three, but Marlene plunges to her death. Overcome by guilt, Tris decides to turn herself in. She spends the night with Four, who thinks he has changed her mind, but she leaves in the early hours as Evelyn silently looks on from a window, to turn herself in to Erudite.

The moment she steps through the Erudite screen, she is surrounded and arrested. Jeanine then subjects her to each of the sim trials of the Factions. Tris is almost killed in the process, and Jeanine reluctantly stops the sim, allowing Tris to rest in a cell with her brother Caleb, who is now working with Jeanine. Caleb tells Tris that he is being selfless by turning his only sister over to the Erudites for what he believes is the greater good. Peter, who is now the guard assigned to Tris, jabs her in the back with an injection while escorting her back to the chamber, after she discovers that Four is also captive in the facility.

Once again, Tris goes through the simulations, but before it can be completed, her vital signs drop and she appears to die. Jeanine becomes distraught for a moment, then resigned to the fact that she must once again find another Divergent. Tris's body is disconnected from the sim cables and wheeled over to Four's cell. In a vicious display of gloating, Peter shows Four Tris's lifeless body. Tris then awakens with a deep breath, and Peter assists Four in overpowering the guards, revealing that he is helping them in return for Tris' sparing his life in the sim. Peter then goes to the control room to change the security parameters in order to allow access to the sim room for Four and Tris, who now realizes what the box is and why she needs to open it.

Tris successfully opens the box, and, much to the chagrin of Jeanine, the message inside informs everyone in the control room and testing area that they, the entire walled city, are an experiment, that the Divergents are evidence of the success of that experiment, and the world is waiting outside for them to return to humanity. Jeanine, realizing the box and its revelation will be the undoing of her power, orders the box buried and Four and Tris immediately executed. Before this occurs, the Factionless army hits the Erudite facility, blowing the doors off the control and sim rooms and killing Max before he can execute Tris and Four. Jeanine and Caleb are arrested, and Tris is hailed as a hero by the masses, eager to explore the world beyond the wall.

As Jeanine looks out from her cell, she states that after 200 years since the city was enclosed, there is no telling what awaits them beyond it. Evelyn appears behind her, and tells her that she will never find out, before shooting Jeanine in the back of the head. Then the screen goes black and then the credits come.

Summit Entertainment announced that a film adaptation of Insurgent would be released as The Divergent Series: Insurgent on March 20, 2015, as a sequel to the film adaptation of Divergent with Brian Duffield originally chosen to write the script for the film. On December 16, 2013, it was announced that Neil Burger director of Divergent would not return to direct Insurgent due to him still working on the first film. On February 13, 2014, it was announced that Robert Schwentke was offered the director position for the film and that Akiva Goldsman had been hired to re-write Duffield's script.

Filming began in Atlanta on May 27, 2014. Filming took place at United States Penitentiary, Atlanta. For the Amity Compound, a set was constructed at Serenbe Community south of Atlanta. Filming wrapped up on September 6, 2014.

Accordingly, to the book, there are some flashback moments in the book like:

Insurgent received mixed reception from critics, audiences and fans. Most reviews highlighted it's sleek and high-tech visual style, the performance's from the cast and the increased action sequences. However it also received much more negativity than the first film, mainly getting criticised for its similarities to other dystopian films, its changes from the book, problematic plot-holes and a lack of character growth and involvement. It scored a 29% fresh-rating on Rotten Tomatoes and in Metacritic it received 42 out of 100.

Differences from the Book[] 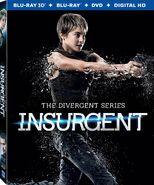